“On the Precipice” is now available!

Now available on the Kindle/Nook/iPad! 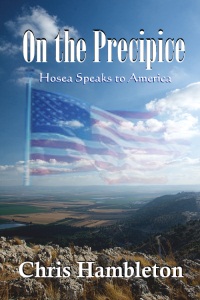 My first non-fiction book is now ready for download! The book is called “On the Precipice – Hosea Speaks to America”, a study/commentary on the Book of Hosea and the numerous parallels between ancient Israel and modern-day America.

The synopsis for “On the Precipice” is:

The Spirit of America is dying – many have grown increasingly aware of this reality since the Great Recession began, but few want to admit it. Today, America is deeply divided and filled with uncertainty, and a palpable sense of malaise has settled over her people. Could it really be that America’s best days are behind her?

We Americans used to be proud of our nation, and certain of who we were as a people. The general feeling that America was a moral and decent country was pervasive throughout the nation, if not much of the world. We proudly flew Old Glory and without reservation proclaimed that the United States of America was the greatest nation on earth.

But today that seems to be the exception rather than the rule. Now we have brief, fleeting episodes of pride in our nation around the holidays or when we hear stories of our soldiers and their bravery. But the general feeling of pride in who we are as Americans and what we stand for is fading, and no one seems to know how to get it back.

Early in America’s history, Alexander de Tocqueville wrote, “America is great because Americans are good.” If America’s greatness is fading, could it be that something has happened to her people’s goodness? And if America is in permanent decline, will we accept that fate without a fight?

Are we prepared to honestly look at what has happened – and what is happening – to our country? Are we prepared to examine the heart of our beloved nation and diagnose the disease that is threatening to take her very life?

“On the Precipice” is available on the Kindle, Nook, iPad, and other eBook readers/distributors.

Chris resides in Cape Canaveral, Florida, where he is employed as a software developer and consultant. He has authored more than a dozen books, as well as developed several websites, software applications, and written software-related articles. His other interests include traveling, hiking, running, studying the Bible, reading American history and politics, and literally devouring good fiction books.
View all posts by Chris Hambleton →
This entry was posted in Uncategorized. Bookmark the permalink.