The Seed of Haman is now available! 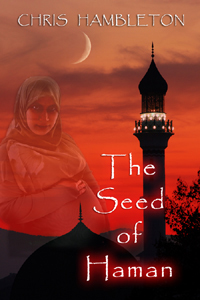 The Seed of Haman

Now available on the Kindle/Nook/iPad!

My latest novel is ready for download! The book is called “The Seed of Haman”, and is the first book in a new series called “The HaZikaron Series”, an espionage series which revolves around an Israeli covert unit with a prophetic spin.

The book can be downloaded from: Amazon or Barnes & Noble.

The synopsis for the book is:

In the heart of Iran, a family secret has been passed from father to son, mother to daughter, generation to generation – a line unbroken by time. And Dr. Shahzad Yavari, the professor of geopolitics at Tehran University, is destined to become the next recipient of this legacy.

After the sudden death of his father, Dr. Yavari learns of the most closely-guarded secret of his family: an astonishing lineage the stretches back more than three thousand years, and the inheritance of not only a kingdom lost, but a kingdom stolen from them. With this revelation, an ancient vendetta is reawakened and Yavari quickly begins rising to power in the Islamic Republic of Iran.

Thirteen years after Dr. Yavari becomes a top adviser in the regime, Iran has completed its quest to become the second nuclear power in the Middle East, though not without tremendous cost. Rumors of espionage and infiltrators abound throughout the program, and no one is above suspicion. While Iran begins to capitalize on their newly-acquired nuclear status, Israel grapples with the realization that America may not assist them in preventing a nuclear Holocaust.

Deep inside the Quds Uranium Enrichment Facility near Qom, the scientists and technicians are under constant surveillance by the ever-watchful eye of the Iranian Republican Guard as the newest, fastest centrifuges are brought online. Within months, Iran’s nuclear program at Quds will be producing several warheads per year.

To counter the growing threat of a nuclearized Iran, a team of Israeli agents has been dispatched to Qom with the sole objective of stopping the enrichment program at Quds by any means necessary.

“The Seed of Haman” eBook is available on the Kindle, Nook, iPad, and other eBook readers/distributors. The paperback version of the book will be available within a few weeks.

Chris resides in Denver, Colorado, where he is employed as a software developer and consultant. He has authored more than a dozen books, as well as developed several websites, software applications, and written software-related articles. His other interests include traveling, hiking, running, studying the Bible, reading American history and politics, and literally devouring good fiction books. Recently, he has been learning to enjoy classical music, playing the piano, and learning Hebrew.
View all posts by Chris Hambleton →
This entry was posted in Uncategorized. Bookmark the permalink.