My God, It’s Full of Stars!

Posted on September 21, 2015 by Chris Hambleton

One of the most memorable movie lines from my childhood that I’ll never forget is: “My God, it’s full of stars!” These were Dave Bowman’s final

words as he entered the monolith in the movie “2001: A Space Odyssey”; what made them especially memorable is probably because most of the movie was silent. The other movie line that’s permanently stuck in my head is: “1.21 gigawatts!??!” from “Back to the Future”.

I couldn’t help but have that same reaction when I saw the crystal-clear night sky from the middle of the Badlands back in September. Though I frequently walk the dogs and see the stars most evenings, it’s a completely different experience seeing the night sky in the middle of nowhere than in the suburbs. In fact, it was my first time seeing the Milky Way, though I have seen numerous pictures of it. On even a clear night in the suburbs or city, you’re lucky to see a quarter of the stars that are visible to the naked eye. But out in the middle of nowhere with no light pollution, you can see many, many more — and the Milky Way is the center-piece of the entire scene!

Several years ago during one of my Bible studies, I stumbled upon the “Gospel in the Stars” theory from Joseph Seiss, which provides a good explanation as to how astrology likely originated at Babel and why the zodiac is so similar between many disparate cultures (Chinese, Chaldeans, Egyptians, Druids, Hebrews, etc.). Astrology appears to be even older than writing itself in the ancient world, at least how most historians date man’s history.

The basic idea behind the “Gospel in the Stars” is that God revealed the names of the visible stars, constellations, and their meanings to Adam, Seth, or Enoch (or someone other ancient patriarch). From there, they devised a 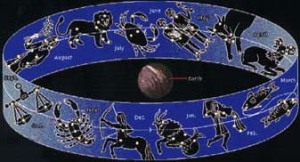 system of word-pictures to help them remember the names of the stars. The names of the stars in the constellations tell the story of God’s plan throughout all history: that mankind had been corrupted by sin, that man’s sin could only be atoned for by sacrifice, that God Himself would provide a Redeemer to restore the broken relationship between God and mankind, that this Redeemer would then destroy the wicked Serpent, and then He would finally restore peace and harmony to all Creation.

In the Bible, the zodiac is known as the Mazzaroth and is mentioned several places, one of the foremost being in the Book of Job where God Himself mentions some of the details of the stars and constellations that could not have been known at the time. Genesis tells us that God created the stars and placed them in motion to serve as instruments for keeping time and also for revealing signs and wonders (such as the Bethlehem star). One of the brighter constellations visible only from the Southern Hemisphere today is the Southern Cross, which hasn’t been visible from our hemisphere for the last two thousand years. Before that, it could clearly be seen close to the horizon. A curious coincidence? Not in God’s creation! Why, it’s almost as if the Southern Cross was visible until the time of the Crucifixion, and when that event was completed and His work on the Cross was finished, the Southern Cross vanished below the horizon. Before then, it could be seen as far north as Jerusalem.

One observation from the Bible is that Satan and his angels can only corrupt — they cannot create no matter how hard they want to. They can only corrupt, kill, and destroy; they cannot create. The ability to create only belong God and those He grants it to, namely mankind. With that general principle in mind, it’s likely that the original meaning of the Mazzaroth was corrupted by Nimrod at Babel, who built a tower unto — or for the worship of — the heavens). The builders at ancient Babel didn’t build a great tower to escape another flood as much as a profane center of worship that corrupted God’s “message” in the stars. When the 70 tribes/clans were scattered from Shinar, they each took the corrupted story of the stars with them, though many of the concepts, symbols, and structures remained similar. Notice what Psalm 19 says:

The heavens declare the glory of God;
And the firmament shows His handiwork.
2 Day unto day utters speech,
And night unto night reveals knowledge.
3 There is no speech nor language
Where their voice is not heard.
4 Their line has gone out through all the earth,
And their words to the end of the world.

In them He has set a tabernacle for the sun,
5 Which is like a bridegroom coming out of his chamber,
And rejoices like a strong man to run its race.
6 Its rising is from one end of heaven,
And its circuit to the other end;
And there is nothing hidden from its heat.

It’s been said that of all the creatures on earth, man is the only one who is able to both look up to the heavens and down at the earth. Most creatures only look up if there’s danger above from birds of prey, but  most spend the vast majority of their time looking down at the earth. But man is different — we’re made to look at both the ground and the sky with the same ease, along with everything around us. It’s almost as if we were designed to observe all that surrounds us, whether it be in the heavens above or the earth below.

Have you ever considered why there are even stars in the first place? Really, stop and think about it for a moment. Unlike the sun, moon, and even a few of the planets, the trillions upon trillions of stars that exist all around us have very little influence upon this earth. They’re so far away and yet God painstakingly created — and went to the trouble of naming — every single one of them!

All the planets, stars, galaxies, and everything else in this great big universe exist all for the glory of God. When we look up at the stars, He wants us to know Him and see how infinitely great He is. He wants us to ponder Him, to know Him, to give Him glory for His incredible handiwork which He spoke into existence. He wants to tell others His story, and what better place to start than in the stars? While no one can claim that the “Gospel in the Stars” is definitively true, from the best evidence we have (from the ancient names, pictures, and legends) that appears to be the case. If anything, it’s an interesting theory that should cause us to give God glory and draw us closer to that which we KNOW is His revealed truth: the Bible.

So sometime when you’re feeling adventurous or maybe just want to get a bigger glimpse of God’s glory and His handiwork, take a long drive out to the middle of nowhere on a dark moonless night. Get away from the city, suburbs, and all those man-made lights until you can only see the lights that God created long ago. Pull off to the side of the road or hunker down at a makeshift campsite and then just look up and behold His awesome handiwork!

For in six days the Lord made the heavens and the earth, the sea, and all that is in them, and rested the seventh day. — Exodus 20:11a

Chris resides in Denver, Colorado, where he is employed as a software developer and consultant. He has authored more than a dozen books, as well as developed several websites, software applications, and written software-related articles. His other interests include traveling, hiking, running, studying the Bible, reading American history and politics, and literally devouring good fiction books. Recently, he has been learning to enjoy classical music, playing the piano, and learning Hebrew.
View all posts by Chris Hambleton →
This entry was posted in Creation, God, Personal and tagged Bible, faith, God, personal. Bookmark the permalink.