The Most Important Question

If someone pulled you aside and asked you “What is the most important question ever asked?” what would you answer? Some of the more probable answers would be “Where did I come from?”, “Where am I going?, or “Why am I here?”

With such a question in mind, the Bible quickly comes to the rescue. In fact, the very first question asked just happens to be the most important one that we can ask: “Did God really say?” All other questions we might come up with in this world are secondary to that primary question.

Though it’s one of the more significant concepts in the Bible, the Law of First Mention is often not applied nearly enough when studying the Bible. In theological terms, the Law of First Mention is “the principle in the interpretation of Scripture which states that the first mention or occurrence of a subject in Scripture establishes an unchangeable pattern, with that subject remaining unchanged in the mind of God throughout Scripture.” In layman’s terms, this means that whenever a particular word or concept is encountered in the Bible, its first occurrence should be used as the main source to more fully understand and interpret it.

As the Creator, God has created a universe full of laws which are extremely precise, detailed, and complex which govern all entities from atoms to huge galaxies and everything in between. Things that may seem so basic and simple such as bacteria or a simple cell are actually incredibly complex the more closely they’re examined. Yet when it comes to His Word, we often don’t ascribe that same precision, complexity, and depth — though it’s His Book, to many of us it’s still ink on a page and not this supernatural thing filled with life, depth, and complexity. Like His Creation, the deeper we dig into His Word, the more detailed, intricate, and astounding it becomes. When applied consistently to the Bible, the Law of First Mention alone can provide several years’ worth of studies if one has the time (and patience!).

One of the best examples of the Law of First Mention in the Bible is the first occurrence of the word “love”. It’s not found until Genesis 22:2 in which God commands Abraham, “Take now your son, your only son Isaac, whom you love, and go to the land of Moriah, and offer him there as a burnt offering on one of the mountains of which I shall tell you.” It’s not that God didn’t love us before this (a nearly 2,000 year-span), but that His Word simply didn’t use it in it’s current inspired form — by His design. In this passage, God is having Abraham and Isaac prophetically act out the sacrifice that the Father would make of His Son 2,000 years later, and in the very spot no less! In this context, the word “love” means much more than simply deep affection and parental love — it means how he feels about the thing he cherishes most. Aside from God and Sarah, Isaac was Abraham’s entire world, the son of promise, as well as his heir and legacy. Also, God refers to Isaac as Abraham’s “only son” even though he wasn’t (remember Ishmael?), yet God slights him to make the prophetic model perfectly fit. In the end, Abraham chose to obey God and keep the faith even though it might cost him his beloved son. His faith in God was so great that he even believed that He could — and would — raise the dead (Hebrews 11:19). Now if God wants us to not only know how much He loves us and the great lengths He would go to redeem us, wouldn’t the best place to first mention the word “love” be in the greatest foreshadowing of what He would one day do for us on the cross?

With the Law of First Mention in mind, the first question in the Bible is asked from the serpent to Eve in Genesis 3:1: “Did God really say, ‘You shall not eat of any tree in the garden’?” While the question is simple enough, what the serpent did was nothing short of revolutionary, as it questioned God’s authority, integrity, and benevolence. For the first time (that we know of), God’s Word was called into question. And while that first question is focused primarily on the trees in the Garden, the most significant part of the question can be boiled down to “Did God really say [fill in the blank]?” That blank can be filled in with all sorts of matters, and usually is many times a day! Did God really say that I should love Him with all my heart, mind, soul, and strength — though it may cost me everything? Did God really say I should love others as myself — though they don’t deserve it? Did God really say that I should (or should not) do this or that — though I desperately want to?

This post began as part of the previous one about dinosaurs and faith (“Dinosaurs: A Question of Faith“) and quickly became too long to include. Not only is the Flood, the dwelling of dinosaurs and men together, and a young-earth creation constantly scoffed at in much of the world (and in the church) today, but many aspects of the historical record of the Bible are as well, particularly the first half of Genesis. In the minds of skeptics, if any part of Genesis can be invalidated, the entire book can be called into question. And if Genesis thereby falls, the rest of the Bible falls with it because it’s the very foundation of the entire book, particularly the Gospel (no Fall means no need for a Savior). Often even the eye-witness accounts in Genesis are disputed, though the evidence is right in front of us. The story of how the Dead Sea was formed at the destruction of Sodom and Gomorrah has been read for thousands of years by millions of people, yet archaeology and geology consistently deny it. In Genesis 18, we have the firsthand account of Abraham (and Lot and his daughters) who SAW these events happen and yet it’s cast aside as a mere myth. “Did God really say that Sodom and Gomorrah were destroyed because of their wickedness, pride, and sin?”

The same holds true with the Flood and the Table of Nations in Genesis 10 — secular archaeology and geology consistently refuse to acknowledge the firsthand Biblical accounts and go to great lengths to counter biblical history. Traditional archaeology is very comfortable with the slow, steady progression in which mankind is crude and gradually becomes more civilized and smarter, but the reality is that man was just as intelligent then as he is now (if not moreso!), and that just like today, many different things were happening all at the same time. As with the Fall, soon after the Flood cities were being built, crops were being farmed, animals were being domesticated, wars were occurring, and everyday struggles were happening similar to today. Some were very civilized while others were very basic and crude. Knowledge and technology ebb and flow, rise and fall. Even in the 21st century, we have stone-age cultures existing not too far from highly civilized societies such as in South America, Africa, and Australia. “Did God really say there was a worldwide Flood that destroyed the former world and everything and everyone in it except for one family and a boatload of animals?”

In the end, how we perceive our world and interpret history, geology, and archaeology comes down to our personal faith and our answer to that one fundamental question: “Did God really say?” In examining His creation, it’s almost as if He has made it so that we would be forced to consciously choose between what He said and what others may say, whether it’s a serpent or a pastor or a professor. As Psalm 19:1 and Romans 1:20 declare, God’s handiwork and witness have been clearly displayed such that no one is without excuse. And while He could have put up a huge heavenly billboard declaring Himself to us, He didn’t — He gives us the freedom to choose. Aspects of our universe have the appearance of great age so we would have to consider it, even though there are many other factors that point to the reality of a young creation. But even if He would’ve done so (as with the constellations/Mazzaroth), mankind would have devised a way to deny Him. 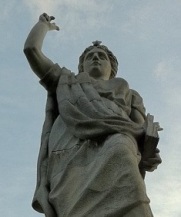 Curiously, the second question in the Bible is asked from God to Adam in Genesis 3:9: “Where are you?” which is just as important as the first. As the first question asked by God, it’s incredibly significant because it shows His love and concern for His creation. When I was younger, I used to picture this scene in the Garden of Eden as Him being this angry giant stomping through the brush bellowing “Where are you?!” But does that match with God’s character and personality in the rest of the Bible, particularly with Jesus in mind? Not at all — and by putting Jesus in the Garden as the One seeking after Adam, that scene becomes much softer and gentler, if not even mournful, as if He’s calling for one of His little lost sheep. The pinnacle of His creation just disobeyed and rejected Him — and wanted to be equal with God Himself (knowing good and evil) — and yet God is seeking after him to draw him back! He’s not angry or vengeful but grieved over their broken relationship, the loss of intimacy. Isn’t that the way He calls to each of us as His lost, terrified sheep: “Where are you?”

God always comes seeking us first. God always initiates in drawing us closer to Him. God always goes seeking after the lost. God always intervenes in His creation — sometimes quietly and sometimes very dramatically. God is always the initiator and we are the responders. God intervenes and interrupts and interjects Himself into not only His creation, but into our individual lives. While He offers everyone His gift of salvation, sometimes He has to go to extreme measures to get the attention of those whom He has called, though we may be running from Him faster and farther than Jonah! And though God always gives us a choice, in the end He always has His way.

As Christmas rapidly approaches and we jump into the New Year, let us seek to keep those two questions at the forefront as we live and respond accordingly: “Did God really say?” and “Where are you?” When we’re tempted to compromise or surrender or hang it up, let us remember that His is for us and helps us in our struggles (Romans 8:31-39).

May you have a Merry Christmas and a Happy New Year!

“For unto us a Child is born, unto us a Son is given; and the government will be upon His shoulder. And His name will be called Wonderful, Counselor, Mighty God, Everlasting Father, Prince of Peace. Of the increase of His government and peace there will be no end, upon the throne of David and over His kingdom, to order it and establish it with judgment and justice from that time forward, even forever. The zeal of the Lord of hosts will perform this.” — Isaiah 9:6-7

Chris resides in Cape Canaveral, Florida, where he is employed as a software developer and consultant. He has authored more than a dozen books, as well as developed several websites, software applications, and written software-related articles. His other interests include traveling, hiking, running, studying the Bible, reading American history and politics, and literally devouring good fiction books.
View all posts by Chris Hambleton →
This entry was posted in Character, Christian-life, Creation, God, Prayer, Refactoring and tagged Bible, Character, Christian, Creation, God, Growth, Love, personal. Bookmark the permalink.