This week in Israel, the nation observed “Yom HaShoah” (Holocaust Remembrance Day) to remember the 6+ million Jews (as well as the 6+ million others) who were murdered in the Holocaust. On Yom HaShoah, loud sirens ring out throughout the nation and everyone immediately stops whatever they’re doing (driving, walking, shopping, praying – everything), rises to their feet, and stands perfectly still until the sirens cease (about one minute). Except for the wind, birds, and dogs, the entire land falls silent.

Next week, Israel will observe “Yom HaZikaron” (Memorial Day) and then the following day, “Yom HaAtzmaut” (Independence Day). They intentionally link the two holidays together because without the sacrifices of their countrymen, they would have no independence. When Israel first became a nation again in 1948, they were immediately attacked by their five Arab neighbors, as well as those from within their own country – yet they not only survived, but thrived despite the overwhelming odds against them. In fact, one of best proofs that the God of the Bible is real and sovereign is in the survival of the Jewish people throughout countless waves of persecution over the millennia.

If any group of people in the world could be justified in being bitter towards others (particularly their neighbors), it should be the Jews – yet curiously they as a whole are not, or at least it’s not typically reflected in their temperament and policies. Of course, there is still some racism, but it’s incomparable to what’s around them. Arabs are granted full citizenship rights in Israel, full representation, and their holidays are respected despite dwelling in a predominantly Jewish state. In contrast, most of their Arab neighbors treat Jews as second-class citizens, do not recognize their holidays, and even refuse to recognize Israel as an official nation.

The difference in attitudes between Israel and their neighbors – if not much of the world – is rather remarkable, both at the national level and the individual level. Though the Arab nations are blessed with an abundance of oil resources and great wealth, much of their land remains undeveloped, their education system is severely lacking, and their people remain in poverty. In contrast, Israel has few natural resources yet their education system is excellent, their economy is vibrant, and their welfare system is generous – especially towards immigrants and refugees.

Why the stark difference between the two ancient peoples? For the Jews, it goes back to their roots and their character as a people and what they’ve endured over the last 2,700 years. It goes back to them frequently being persecuted, losing everything, and having to start over from scratch when the odds are stacked against them. When a people is forced to endure the unimaginable, they learn how to survive and find creative ways to cope and even thrive.

In Israel, the unofficial philosophy is “tikkun olam”, which means “to repair what is broken” and in a more practical sense, “repairing the world”. During the Diaspora when Jewish settlers began to return to the land, they found arid deserts, malaria-filled swamps, and little freshwater. The Promised Land was anything but – yet they believed it still was, particularly given their faith in the Book. With those promises and that dream in mind, they set out to heal the land and restore what had been destroyed and neglected, and the idea of “tikkun olam” took root in their new culture.

What does tikkun olam look like in practical terms? In Israel, it means planting hundreds of thousands of trees to reforest a barren land. It means draining swamps and providing clean water and irrigation. It means devising innovative solutions to solve real-world problems. It means turning arid deserts into land that can be used to grow agricultural products from figs to wheat to flowers to citrus. It even means raising fish in the desert! It means providing food, medicine, and education to those in need. It means assimilating millions of refugees and immigrants from all over the world. It means doing something good and useful with what little you have.

Is tikkun olam confined only to Israel for their own benefit? Hardly — Israeli companies and entrepreneurs frequently reach far outside their borders to spread their technology and innovation abroad. In the past, they were forced to do so because of the Arab embargo placed upon Israeli goods by their immediate neighbors, so in order to survive and grow, Israeli companies had to market their goods to Europe, America, and Asia. But as a result of those obstacles and challenges, this tiny nation became a global exporter of technology, clean-water solutions, and agricultural products.

Yet while tikkun olam may seem relatively new, it’s a concept woven throughout the Bible, from the first page to the last. However, we typically know it by a different term: redemption. From before the Fall in the Garden of Eden, God’s plan of redemption was in mind: to repair all that was broken in humanity and Creation. Ultimately, He will restore the relationship between us and Himself that we as a race chose to break long ago.

One of the passages in the Bible that bolstered the early settlers of Israel comes from a Messianic prophecy tucked away in Isaiah 35:

“The wilderness and the dry land shall be glad;
the desert shall rejoice and blossom like the crocus;
It shall blossom abundantly
and rejoice with joy and singing.
The glory of Lebanon shall be given to it,
the majesty of Carmel and Sharon.
They shall see the glory of the Lord,
the majesty of our God.” 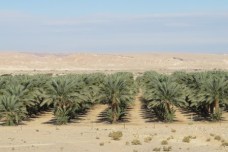 From this 2,700 year-old passage, the settlers and founders of Israel set out to literally make the “desert bloom” despite its absurdity. And while the passage predominantly speaks of the incredible changes that the Messiah will bring to the land when He comes, the settlers didn’t sit back and wait for that to happen – they rolled up their sleeves and set to turn that dream into a reality. And through their hard work and sacrifice, Israel is being a blessing to the rest of the world (Genesis 12:3, 22:16-18), even though they didn’t consciously set out to accomplish that. They simply set out to restore a small piece of land, got to work, and God has done the rest, multiplying their efforts in ways they could not imagine.

Isn’t that the way with how God often works in us? Though He could instantly change the world or empower us to change it, He doesn’t (at least not yet). He plants a dream in us and assures us of His promises through His Word, yet leaves much of the hard work up to us. It’s up to us to roll up our sleeves, get our hands dirty, and drain those swamps, plant those trees, and build those houses. It’s up to us to work hard, use the resources He’s given us, and find creative ways to solve real problems. Glory and honor always follow hardship or even suffering, and rest always follows labor.

Another passage that spoke to the settlers and those who followed was from Isaiah 61:4:

How has Israel repaired their land? Day by day, bit by bit, and little by little but being persistent over time. By a handful of people believing in something and setting out to accomplish it – and mobilizing others to do likewise – they are rebuilding their land. By believing and not losing heart, by persisting even though they keep getting knocked down, by pressing on and sacrificing their immediate comforts for their children and grandchildren. In only a handful of decades, the ancient ruins have rebuilt, the deserts are blooming, and Israel has become a blessing to the rest of the world.

Like Israel, we were blessed to be a blessing, a light to shine in the darkness. How can we use the gifts that God has given us? What can we do today to help repair our world and the world of those around us?

How can we make those dreams He has planted in us become real – even as absurd as some of them may seem? How can we use the time He has given us, even if it seems rather short or insignificant?

Chris resides in Cape Canaveral, Florida, where he is employed as a software developer and consultant. He has authored more than a dozen books, as well as developed several websites, software applications, and written software-related articles. His other interests include traveling, hiking, running, studying the Bible, reading American history and politics, and literally devouring good fiction books.
View all posts by Chris Hambleton →
This entry was posted in Character, Christian-life, Creation, God, Israel, Refactoring and tagged Character, Christian, faith, God, Growth, israel, refactoring, Suffering. Bookmark the permalink.