Dangerous Prayers and Killing the Weed

A couple weeks ago, I posted an entry called “Dangerous Prayers and a Sloppy Wet Kiss” that I’ve been doing more than my share of soul-searching about. Usually after I write about a subject, I tend not to revisit it for awhile. But this one’s different — this one’s more important. This one’s more foundational.

Soon after I returned from Israel a couple years ago (early 2013), something in me changed and I began seeking a deeper, more personal — and frankly more honest — relationship with God. In short, I began praying dangerous prayers, those “Whatever it takes, Lord” types of prayers. However, instead of directing those prayers outwards toward others or whatever was happening around me, I directed most of those prayers toward myself. Instead of praying “Lord, please fix this!” or “Lord, please change them!”, my prayers became “Lord, please fix ME!” and “Lord, please change MY heart!” Before that, had my heart-attitude been really examined at its core, it would’ve been something like “Hey, I know I’m not perfect, but I’m not nearly as bad as I used to be before I was saved. And I’m certainly not as bad as other people, right?”

Wrong. The dirty little secret is that the same core problem exists to the same degree in all of us; it’s just that some of us are better at hiding or masking it than others. That core fault in all of us is the disease of Me-First. Self-interest. When the chips are down, we naturally put ourselves first. It’s usually not our circumstances or those around us that need to change, but ourselves — our own selfish attitudes and self-centeredness. Our own innate desire to protect our self-interests at the expense of just about everything else — usually others, and especially God. Our own self-centered expectations about how our life should be going and turning out, even when it comes to our spiritual progress. 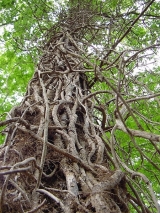 Though we may gain ground in certain areas and win victories over parts of our flesh, there’s always more to conquer. No matter how many battles we may win in this life, the war never really ends because it’s against our own hearts and selves — our very own fallen nature. That seed of self-interest was planted the moment we were conceived and instantly became a weed that grew bigger and bigger without restraint until we’re saved. Only then do we start to understand that the weed of self-interest is in direct conflict with God, who we’ve just given our lives to. Then He sets out to start pulling it, cutting up the roots, chopping it down, and hacking it up. But that massive, deep-rooted weed-tree of self-interest will always be with us until our very last heartbeat — and then it dies with our flesh.

While God often uses, allows, or even sends people, trials, and even suffering into our lives to hack away at that weed-tree, the only way it will really start to wither is through prayer — particularly dangerous prayers. Praying dangerous prayers is like spraying Roundup on our great weed-tree of self-interest. But it’s not just praying those types of prayers that keeps that weed-killer working, it’s yielding to His will and denying ourselves. It’s putting His interests (often through the needs of others) ahead of our own. When Jesus said, “If anyone would come after me, let him take up his cross daily and follow Me,” He wasn’t being dramatic — He was being brutally honest and real. If we want to be more like Christ, we have to be much less like our own selfish selves and deny our self-interests.

What were some of those dangerous prayers I began praying? Several that immediately
come to mind are that He would give me an undivided heart towards Him; that He would remove anything from my life that hinders our relationship; that He would cut out the sin, pride, and selfishness that so easily erupt from inside me; that He would help me love those around me more genuinely and more fully; that He would give me a tender, broken heart for others and be able to empathize better with those who are suffering; that He would help me love my wife the way she needed to be loved rather than how I wanted to love her. A related request was for Him to help me to not only learn to dance, but to enjoy it because it was very special to her. And honestly, I would rather do just about anything else other than that because it felt so unnatural to me — but I did it, and did enjoy it for awhile. Needless to say, soon after I began praying those prayers, things began changing inside me — and then around me.

Has He really been answering those dangerous prayers? Yes, indeed He has — though they were seldom answered how I expected them to be. I’ve often found myself shaking my head in both gratitude and frustration saying, “Thank you, Lord, but that wasn’t what I meant!” I suppose that’s the way it is with God much of the time: He does things in His own way that never seem all that sensible to us. Often He allows things that might seem even worse that what we were praying about, such as more intense suffering. We naturally want our suffering to decrease, not increase! However before I began praying dangerously, my prayers were rarely answered, or at least not in any tangible way worth remembering. It’s almost as if God had been waiting for me to start praying those dangerous prayers and said, “Now you’re ready — now it’s time for you to finally start walking with Me down this narrow, difficult road which I called you to twenty years ago.” Since I began praying those dangerous prayers, my youngest daughter became seriously ill and spent nearly a week in the hospital, my marriage ended, and my family/home has broken apart. Everything I thought was safe and secure has been exposed for what it really was: fragile and built on sand.

Yes. I can say without reservation (okay, mostly!) that I would pray those same dangerous prayers again — and more. You see, over the last several years, I have come to know God as not merely my Lord and Savior, but as my Father. While I’ve always known He was my Heavenly Father, I would rarely call upon Him as such when I prayed. I always referred to Him as “God” or “Lord” which aren’t anywhere nearly as intimate as “Father”… those terms of reverence are rather abstract, removed, and well, safe. It’s one thing to refer to Him as “Father” as His title but quite another to cry out to Him as YOUR Father when you’re curled up on the carpet drenching it with tears. I would go through a dozen divorces if it meant having the relationship with my Heavenly Father that I do now.

If you’ve been wanting to pray more “dangerous prayers” and really draw closer to God, I must caution you — He WILL answer them but not how or when you expect Him to. Dig into the Bible (particularly the Gospels) and take Him at His Word. In hindsight, before I began praying dangerous prayers, I should have taken Him much more seriously when He speaks of suffering and dying to one’s self, of taking up your cross daily and following Him. Jesus means what He says and says what He means. Again, when He beckons us to take up our cross and follow Him, He’s not just being dramatic, much less flippant. When He says that anyone who doesn’t leave their parents, spouse, children, their riches, or anything else for His sake is not worthy of Him, He actually means it! If He suffered in this life and we are called to follow after Him, shouldn’t we expect to suffer too?

Before uttering a dangerous prayer, first count the cost and decide if you really want Him to answer it, because He will — but in His own way and in His own time, not yours! God does answer prayers because He promised to (1 John 5:14-15, John 15:7,16). You’re engaging the Holy God of the universe, not the comfortable grandfather god of the health, wealth, and happiness gospel that is focused on you, not Him. In the Bible, when did God ever give triumph without first sending trial, glory without first allowing suffering, and holiness without first requiring sacrifice? Even in Genesis 1, darkness came before light — He’s not being cruel, that’s just the way He does things.

Though the dark night may be long and difficult, it will only be for a moment in the ravishing light of eternity. When that time of trial comes (and it will), it’ll be Him who sustains you, not yourself. You can trust Him with your most dangerous prayers, no matter what they are. If you’re going to pray, pray dangerously!

“Behold what manner of love the Father has bestowed on us, that we should be called children of God!” — 1 John 3:1

Chris resides in Cape Canaveral, Florida, where he is employed as a software developer and consultant. He has authored more than a dozen books, as well as developed several websites, software applications, and written software-related articles. His other interests include traveling, hiking, running, studying the Bible, reading American history and politics, and literally devouring good fiction books.
View all posts by Chris Hambleton →
This entry was posted in Character, Christian-life, God, Personal, Prayer, Trust and tagged Character, Christian, Divorce, faith, God, grace, Growth, personal, Prayer. Bookmark the permalink.