Posted on September 29, 2016 by Chris Hambleton

Epiphanies. Sometimes they hit you right out of the blue for no apparent reason. I don’t have epiphanies very often, but when I do, they’re usually rather significant. Sometimes they’re a stream of thoughts that rush through my mind, while other times they’re merely very strong emotions that change the way I perceive or interpret something.

When I consider the word “epiphany”, I tend to imagine a bright light-bulb lighting up right over my head and suddenly, everything becomes clear. However, there’s another kind of epiphany that isn’t nearly as comforting, the kind in which you suddenly see things for the way they actually are, not how you believe or imagine or even wish them to be. It almost feels like that light-bulb overhead is actually turning off, leaving you in darkness. I think I had one of those last weekend, and I didn’t like it very much!

The other day, a close friend of mine had a birthday gathering for her mother. I didn’t really think much about it at the time because I know enough people that my calendar is usually filled with birthdays. I’m not quite sure why, but later on this intense feeling of “reality setting in” came over me, and it made me grieve for the first time in a long while about what I’ve lost in the divorce. It wasn’t over the relationship with my former wife, but the relationships with my former family here. It abruptly hit me that I have absolutely no family of my own anywhere nearby and will probably never go to one of those birthday celebrations again, or at least not without an airline ticket.

In that moment, I suddenly felt very untethered from everyone, almost like being alone in a life-raft in the middle of the Pacific. With that epiphany, the realization of just how far away my family is really struck a nerve. Soon after my first daughter was born in 2000, we decided to leave California so we could buy a house and be closer to family. Since most of mine is scattered across the Midwest and East Coast and her’s was mostly here in Colorado, we decided to move to Denver to put down roots. The funny thing (albeit sad) is that while we did put down many roots over the fifteen years that followed, the divorce completely uprooted all my family connections here. I was planning on moving east earlier this year, but for the sake of my kids and their relationships here, I chose to stay in Denver. Though it was the right decision to make, the consequences of that choice and the reality of continuing to live “untethered” here for the foreseeable future finally sank in.

Looking back over the last fifteen-plus years, we always had tons of birthday parties, Saturday-night gatherings, dinners, holiday celebrations, and impromptu visits with my wife’s side — but then after the divorce, it was immediately switched to nothing, at least for me. All those family gatherings and relationships that were comfortable, often taken for granted, and even a little irritating at times are now completely unavailable to me. It’s not really that I miss the individuals in my former family (though there is that to some extent), it’s that I miss belonging to a real family closeby, a group of people you can usually completely be yourself with, a group of people you can laugh and joke and get on each other’s nerves with. Of course, I can always visit my own family back east, but that’s only around the holidays and there’s simply no such thing as spontaneity when you have to fly across the country to see one another.

To add to the mix, the holidays are coming soon, which are much different for me now after the divorce too. Holidays are tough enough for singles, but especially divorcees and widows/widowers because they remember all the times-past, what was and can no longer be. Christmas Eve used to always be spent with my in-laws and the grandparents, but last year I ended up in an expensive restaurant downtown. This year? Who knows — I might just have a tall glass of egg-nog and go to bed early! I used to look forward to the holiday season every year, but now it’s mixed with all these other negative emotions, and I find myself almost looking forward to them being over with so I don’t have to deal with those negative feelings. I didn’t just lose a spouse in the divorce, I lost nearly everyone I had built relationships with over the last twenty years, an entire family of parents, grandparents, uncles, aunts, and cousins. Especially after divorce, people lose many of their social connections because so many are made with other married couples. Though I’m still living in the same home and have the same routines, I may as well have moved to the other side of the world.

The last time I went to Israel, I stayed in a Lone Soldiers’ Home on one of my weekends off-base, which is a mix between a dormitory and a hotel. In the IDF, they have thousands of young men and women who enlist from all over the world known as “Lone Soldiers” because they’re completely alone outside the army. They usually have no family, friends, contacts in the land except a calling/feeling of obligation to serve their homeland. They have no support system except for what the army provides, which is extra money and housing assistance on the weekends and holidays. But while their physical needs are met, their social needs are far less tangible and much more complicated. Every lone-soldiers’ situation is unique, and often what ends up happening is that they connect with other lone-soldiers and/or fellow soldiers with families in Israel and are practically adopted into them while serving in Israel. Holidays and weekends are no longer spent alone, and they have the different social roles and relationships they can connect with and look forward to. It’s nice having all the different facets of a family around, like a mother, father, sisters, brothers, cousins, aunts, and uncles — even if they’re not really your own.

In some ways — perhaps many, MANY ways — being a single-parent with no immediate family around after divorce feels like being a lone-soldier, especially when the kids are at their other parent’s place for the weekends or the holidays. I find life going from being very hectic when they’re around to very quiet (or even very boring) when they’re not. When an emergency occurs (which can be frequently with kids!), what’s a single parent with no real family available or support system supposed to do? Who can you trust to pick them up from school if you have to work late if there’s no one around? And what about birthdays and holidays, especially if their friends aren’t available?

Until I divorced, I never realized how often family is taken for granted and how isolated we can be even in a room full of people. How absurd is it that in this highly-connected world that so many single-parents (or just singles in general) feel very alone and disconnected, yet be in such close proximity to so many others in the exact same situation. The same with retirees and empty-nesters whose kids have grown up and moved away. We’re mere feet away from one another, yet so many of us have the same basic social needs that are going unmet! It’s not merely ironic, but pathetic if we’re honest!

Maybe we need some “Lone Parent” programs here in America similar to the Lone Soldier programs in Israel. Such programs could involve basic single-parent assistance like pickups from school, babysitting, after-school safe-places, birthday parties, pizza-gifts, cards, holidays, “just because” stuff, etc. As a single-parent, wouldn’t it be great to know that someone is just thinking about you and your kids sometimes? Maybe such programs could be paired with retirees or empty-nesters who now aren’t busy enough or no longer feeling needed after working for 30-40 years. People need people, and one of the effects of the Industrial Revolution is that it has divided people into those that are productive/necessary to society and those which are not.

It just strikes me as rather silly (if not pathetic) to have so many people with so many basic social needs that are so closeby, and all it would take is a little incentive and organization to solve part of the problem. But alas, many of us are just too busy, and often mollify our own loneliness by simply adding more activities and busyness. It’s often easier to ignore or minimize one problem by focusing or even creating others. I know what the Bible says about God placing the lonely in families and caring for the helpless and overwhelmed, and I do have a lot of optimism for the future… it’s just that the immediate days ahead seem to have more than their share of dread at times. 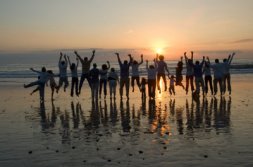 The funny thing about such a “Lone Parent” or “Lone Person” program is that this seems to be one of the basic responsibilities of the Church (caring for mothers, widows, the lonely, etc.), but we seem to be doing a lousy job of it. In the early days of the Pilgrims and Puritans, they actively placed singles, widows, and orphans into families — they rightly understood the importance and necessity of everyone belonging to a family. While the Bible and it’s teachings are very relationship-centric, we in modern America tend to favor independence and self-sufficiency more than is healthy, which leads to being too busy and overwhelmed. Admitting to others that we need help or need others feels like weakness or insufficiency on our part. We’d rather shout “Me do it!” and burn ourselves out than accept help from those who offer it. So many single-parents feel like failures because we can’t keep those twenty plates spinning in the air all at the same time 24/7. We were made to need others and not to try to do it all ourselves, yet we keep trying nevertheless.

The church I attend (Crossroads) has several good programs to help our local community, particularly single-mothers and those who are struggling, such as the “Car Care Clinic” and “Cold Weather Care”, both of which are helping many people and growing quickly. My next questions are, “Why doesn’t every church have such programs?” and “What more can I do to reach out and/or create similar programs to help others?” We need more of those — many more.

If we don’t take the initiative to help those who are lonely and overwhelmed, who will?

“Bear one another’s burdens, and so fulfill the law of Christ.” — Galatians 6:2

Chris resides in Denver, Colorado, where he is employed as a software developer and consultant. He has authored more than a dozen books, as well as developed several websites, software applications, and written software-related articles. His other interests include traveling, hiking, running, studying the Bible, reading American history and politics, and literally devouring good fiction books. Recently, he has been learning to enjoy classical music, playing the piano, and learning Hebrew.
View all posts by Chris Hambleton →
This entry was posted in Character, Christian-life, Family, God, Israel, New Beginnings, Personal, transitions and tagged Character, Christian, Divorce, God, Growth, new beginnings, personal, refactoring, relationships, transitions. Bookmark the permalink.